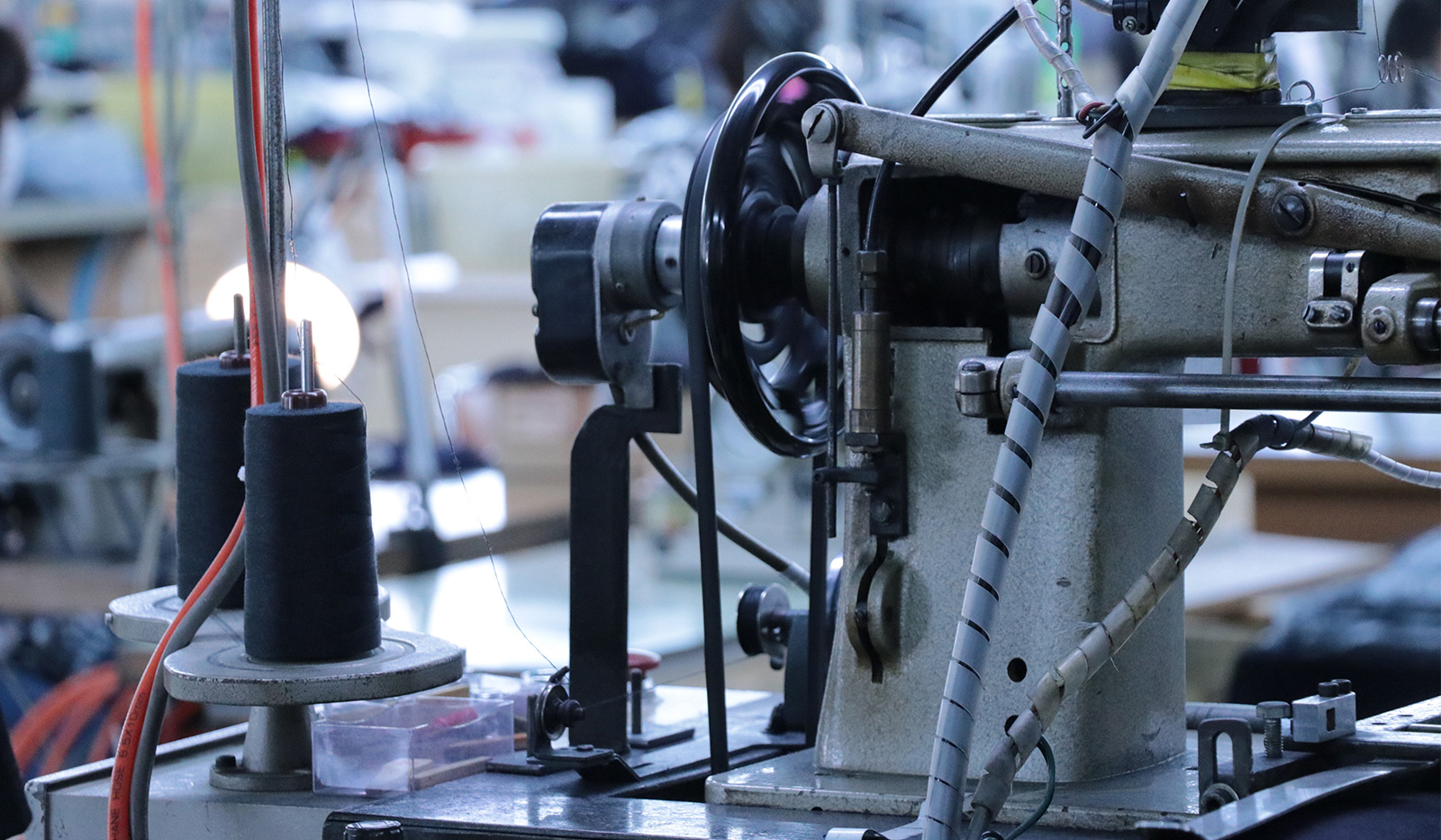 This refers to the size of the interval left between the rows of stitching that run through the Futon. This is referred to in units of Bu in the case of hand-stitched Bogu, and in units of mm for machine-stitched Bogu. Bu is a traditional Japanese unit of measurement, and is a fraction of the Kane-jaku or common Shaku - which itself is part of the ancient Shakkanhou measurement system. In the case of Bogu, one Bu is equal to 3.03mm.

As a rule of thumb, as the Sashi-haba gets finer, the Futon in turn becomes more rigid, and also thinner – as the Futon itself is physically bound tighter. This, makes it both less protective and less comfortable, however, it is easier to mould into a desirable shape, and is considered by many to have an overall better appearance.

Thus, in turn if the Sashi-haba is wider, the Futon is both thicker and more flexible, making it more cushioned and comfortable. However, the trade-off is that it is harder to mold into a desirable shape, and is not as suitable for areas of the Bogu where a rigid Futon may be favored – For example, the Mendare are preferred by many to have slightly more rigidity than other areas of the Bogu, as forming them into the correct shape is critical in ensuring the fine movements are kept unseen to the opponent, ensuring the overall look of the Kamae is correct, and that the Mendare correctly deflect missed strikes away from the shoulders.

Amongst modern practitioners, the most popular choices tend to be 2.0 or 1.5 Bu for general use hand-stitched Bogu, and 4mm or 3mm for machine-stitched Bogu.

However, this serves only as a general idea, and what is extremely important is NOT to base judgment on whether or not a particular Bogu set is suitable or not on the Sashi-haba alone. There are several determining factors, and if in doubt, we recommend you to contact our team of professional advisors.

Refers to the actual length of each individual stitch, or in other words, the size of the interval the Futon is actually pierced by the needle and thread at the time of stitching. This varies depending on the individual Bogu and the stitching type, however, it is not something that is generally offered as a selectable option when purchasing a Bogu, as it is a choice which – for the sake of optimum durability – is best left to the experience of the craftsman. In a similar way to the Sashi-haba generally, the tighter the Sashi-me, the thinner and stiffer the Futon becomes.

In Japan, the Sashi-me is often called the 'pitch' (Pittchi), hence the name 'All Japan Pitch'.

Hand-stitching the Futon of a Bogu is indeed a laborious task that requires a large degree of skill and expertise. There are two main types of stiching used, called 'Naga-zashi' and 'Ten-zashi'.

Naga-zashi is by far the most common, as it is less labor intensive and requires less skill, so it can be made for a lower price. However, Ten-zashi offers both increased durability, flexibility and protection. 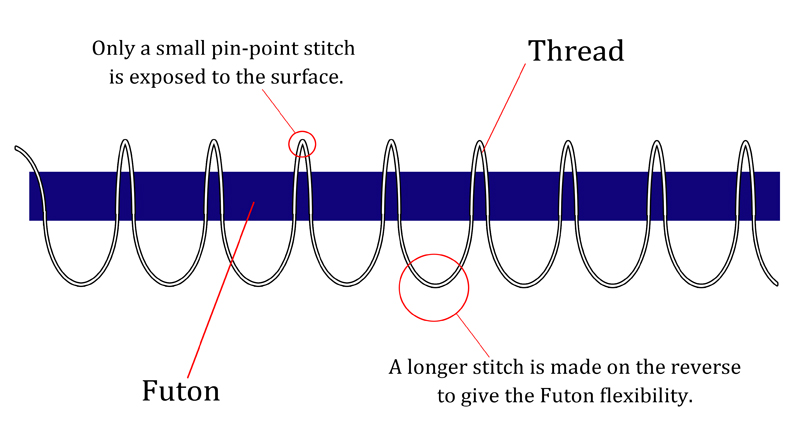 With Ten-zashi the needle is passed through the Futon diagonally, leaving only small pin-point stitches on both sides of the Futon. This is much more time consuming than Naga-zashi and requires a level of skill that most Bogu craftsmen no-longer posses. This style of stitching carries with it many advantages, such as only leaving small amounts of thread on both sides. Meaning that durability is increased not only on the surface - where the Bogu is struck with the Shinai - but also on the reverse, where the Futon is exposed to friction from rubbing against the body. Further, more airparticles are kept between the stitches, which gives the Futon much more flexibility and cushioning, whilst retaining enough rigidity to keep a good shape. 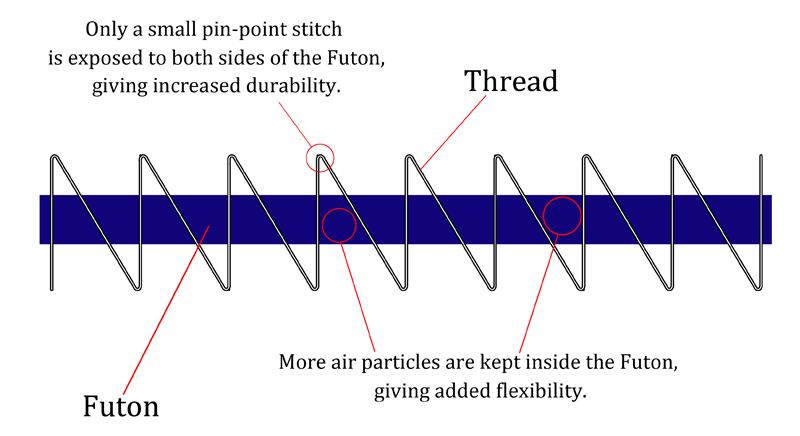 Naturally, whichever method is used, the process is incredibly labour intensive, so you can expect to pay more for a hand-stitched Bogu, than for a Machine-stitched Bogu set of the same specification.

As the name implies, the Futon of a machine-stitched Bogu is stitched using an industrial sewing machine. In a similar way to a household sewing machine, the machine uses 2 separate threads which pass through the Futon from each side. As more thread is exposed to the surface of the Futon, this provides slightly less durability than a hand-stitched Futon of the same Sashi-Haba (stitch width). In addition machine-stitched Bogu generally uses a shorter Sashi-me (stitch length) than hand-stitched Bogu, which means the Futon is bound somewhat tighter, making it thinner and also slightly more rigid. 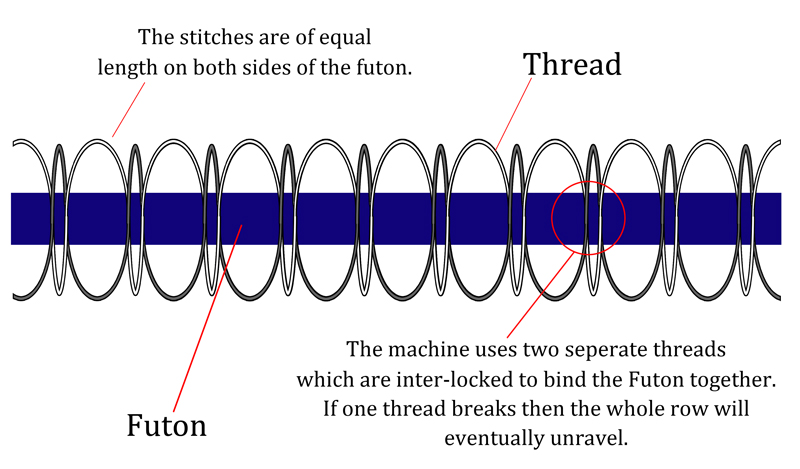 As the process is much less labour-intensive than hand-stitching, you can expect to get a cheaper price on a machine-stitched Bogu, than you would a hand-stitched Bogu of the same specification.

Our original New All Japan Pitch brand of Bogu is all stitched using this special stitching technique, and is one of the main reasons the brand has so quickly become one of Japan’s most popular. Essentially, the technique used is similar to machine-stitched Bogu, however, the pattern of stitching itself is slightly different. With "All Japan Pitch-zashi" Bogu, the stitches Sashi-me (stitch length) is actually longer than with standard machine-stitched Bogu, and is instead similar to the Sashi-me used in hand-stitched Bogu – making it thicker, and more protective, whilst at the same time giving additional flexibility. As the stitches are longer, they have a slightly higher probability of breaking, which is a problem encountered frequently with Bogu sets which use a similar, imitation pitch type stitching – usually due to weak thread, or inappropriately spaced Sashi-me. However, the original "All Japan Pitch-zashi" uses both a combination of a tried and tested optimum Sashi-me, and also a specially developed thread, which is resistant to breakage. 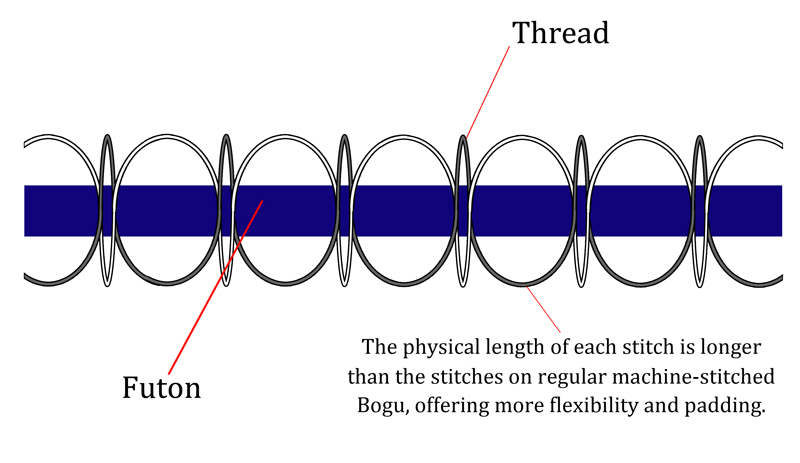 The stitching applied to the Mendare play an important role in the flexibility, comfort and the overall appearance of the Men itself. There are three main types of stitching used on the Mendare, and they are as follows :

This is simply where the stitches are applied at a 45-degree angle to the main stitching on the Futon. This gives more flexibility to the Mendare, making it easier to move the shoulders when swinging the Shinai. Naname-zashi is the most common type of stitching used on the Mendare of modern-day Bogu, as it provides a good balance between comfort, protection and appearance.

Gunome-zashi refers to a method of stitching where an additional, usually off-set row of stitches is inserted between the standard rows of stitching. This gives the Futon more rigidity, and also makes it thinner, so it is used in places where forming the Futon into a desirable shape is important - hence it is used on the Mendare. It is most commonly seen on hand-stitched Bogu, though a similar effect can be seen on machine-stitched Bogu also - paticularly those with a wider Sashi-haba. For example, a 6mm machine-stitched Bogu may use 3mm stitching on the Mendare, to produce the same effect.

When the main rows of stitching on the Futon continue in a straight line, all the way to the end of the Mendare, it is known as Bou-zashi. This is somewhat rare in modern machine-stitched Bogu sets, however, it is still frequently used in hand-stitched Bogu, particularly if the Sashi-haba is tight - for example, 1.2 Bu. It is preferred by some, as although it lacks the flexibility of Naname-zashi, it provides a very simplistic, classic appearance.

Your cart is empty.